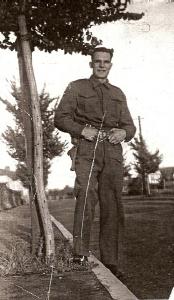 Jim Hale
England
James Hale was also known as Jim. He was born on Thursday, 2 May 1918 at 126 Davenport Road, Toronto, York Co., Ontario, Canada. Dr. R. Hawley attended at the birth. He appeared in the household of Frederick Hale on the census of June 1921 at 91 Davenport Road, Toronto, York Co., Ontario, Canada. He was enumerated as: Hale, James, son, male, single, age 2, born Ontario, both parents born Ontario, Canadian, English, able to speak English, unable to speak French, Church of England, unable able to read and write. In 1922 he was placed in the Protestant Children's Home, Toronto, Ontario. He does not show up in the available orphanage register. Perhaps it was the "Joseph Workman" he was sent to from Jessie Ketchum Public School. I have been unable to find out what Joseph Workman was. There is a school by that name in Scarborough although it was not opened until 1949. The first Protestant Childrens Home in Toronto was located on the west side of Dovercourt Road at St. Anne's Road. In the 1920's (no exact date) the home was taken over by the Orange Order, which opened a large facility on Yonge Street, north of the city, the Royal True Blue and Orange Home, Richmond Hill. These are photographs of the orphanages. In June 1925, he was made a permanent ward of Children's Aid, Toronto, Ontario. These are assumptions based on his brother Peter's records.
James began military service on 25 June 1940 at Penticton, British Columbia, Canada, when he enlisted with Seaforth Highlanders of Canada. He became Regimental Number K53959, and was sent to Calgary I (R) T C from Vancouver on July 15 1940. Here he took Army Tank Training, and was a junior instructor. He was admitted to Belcher Hospital, Calgary, on December 4, 1940 to have his septic tonsils removed. Upon admittance he weighed 166 lbs, clad, and upon discharge from hospital weighed 155 lbs.
On March 18, 1941 he was transferred to Camp Borden, Ontario, as an Acting Lance Corporal, Provost Duties. He arrived in England On June 21, 1941, and attended a Motorcycle course, Provost School and on August 1, 1942 he was confirmed rank of Sergeant. He fought in Europe from June 28 1943 until March 5 1945, in Sicily, Italy, France, Holland and Germany as a Reconnaissance Sergeant for the 14'th Army Tank Btn. Of the 1921 days he was enlisted, 407 were spent in Canada, 737 in England, 617 in CMF and 160 in NWE. Of the total 1921 days, he was granted 78 days of leave, 6 of which were his hospital stay in Calgary, and after arriving in Vancouver August 13, 1945, he was granted 29 days leave and R/A.
He was awarded the following: 1939-1945 Star; Italy Star; France and Germany Star; Defence Medal; War Medal 1939-1945, Canadian Volunteer Service Medal and Clasp; and the Bronze Cross (Netherlands) 1945, which were not issued or received until 1948.
James ended military service on 27 September 1945 at Vancouver, British Columbia, Canada, on demobilization. On his Computation of War Service Gratuity, it was deemed he was entitled to $1,145.62 , payable in 7 monthly instalments of $163.66 each. On his Qualification Card, he stated his interests as Hunting, Fishing and Swimming; and for Team Games and Position, Lacrosse - centre, Baseball - pitcher, Soccer - R. wing.      On the Supplement To Personnel Selection Record, dated August 7, 1945, it states the following: PLAN: Work as forest ranger for B.C. Government APPRECIATION OF PLAN: Hale has worked chiefly as a logger in B.C. timberlands and has decided that he would like to become a forest ranger. Physically he appears equal to the outdoor life involved and his experience in man management (confirmed Sjt) suggests he could effectively supervise other men. Hale is a clean cut, virile looking man and his record suggests he could readily master the trg required to become a forest ranger. FURTHER COUNSELLING: In opportunities and trg requirements for forest ranger. Signed, J A Ritchie, CAPT SPO
According to another document dated September 26, 1945, his future plans were to get a job as a Forest Ranger and the counsellor's recommendations were as follows: HALE, age 27, is a tall, well built, quiet spoken, mild mannered man. Reserved and uncommunicative, he appears earnest and dependable. Educational background is somewhat limited, for what he has in mind, but occupation background centres principally around the logging industry. States he is disinclined to return to logging and would prefer employment as a Forest Ranger. Says he has, alternatively, his eye on a desirable piece of property which he may acquire and start a hunting lodge. Says he has knowledge of this business and believes he would like it. He left his kit bag overseas, which was forwarded to him July 23, 1946 and the contents listed were: Kit Bag, Photo and Folder, Scarf, Pyjamas 1, Shirts (K) 1, Writing Mat., Shirts (C) 3, Shorts (C) 3, Beret, and two illegible items.
James died on Sunday, 21 November 1976 at home, 475 Green Ave, Penticton, British Columbia, Canada, at age 58 years, 6 months and 19 days of Cerebral Aneurysm. He was cremated on 24 November 1976 at Penticton, British Columbia, Canada.